HMS Gambia was nearly always described as "a happy ship" in that life onboard was not too onerous. The officers were fair and usually as relaxed as navy regulations allowed them to be. The ship was cramped for the crewmen. The ship's sailing and fighting capabilities came first, creature comforts for the crew came after these.

John Eilbeck reported in the HMS Ganges Association Gazette that sometime in 1949 to 1950 that some modifications were made to HMS Gambia for the comfort of the crew:

Three cruisers of the Royal Navy, the Swiftsure, Ceylon and Gambia had been refitted and a number of comforts and amenities fitted. All electric bakeries and galleys, refrigerated stowage for fresh fruit and veg, drinking water coolers and ice cream soda bars (the Goffa [or Goffer] machine). Bathrooms updated, stainless steel wash-basins, each with a hot and cold water supply, and with shaving light and mirror over each basin. The Laundry extended (more space for ex-patriot Mainland China dhobymen), cinema and SRE provided.

The original HMS Gambia Association website contained two images of the daily crew routine, one for when in harbour and one for at sea. These are marked as example routines and are undated: 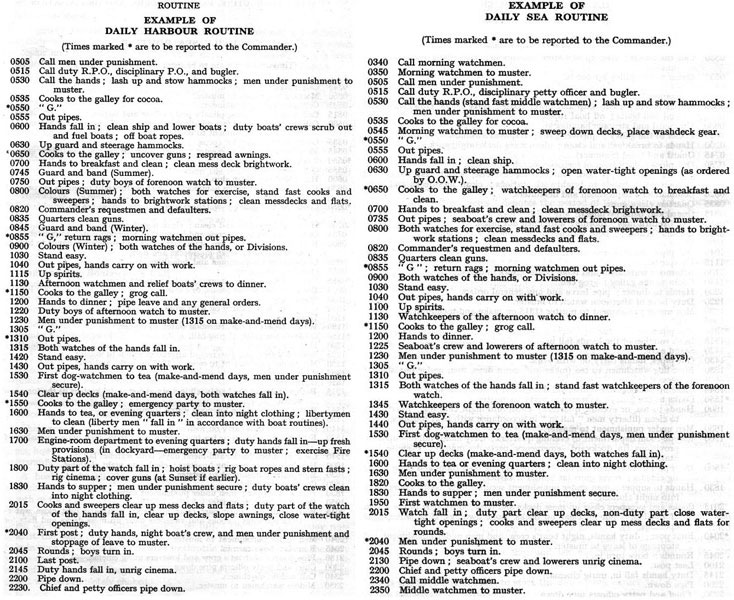 This is the harbour routine:

This is the sea routine:

Something I had not realized was that not all the routine work was done by the ships crews. The following comes from the HMS Victorious 1966-67 Commission Book...

Few of us appreciate the great service done by "K.P." and his teams of laundrymen, tailors and cobblers. We tend to take for granted the efficient laundry service, and the facilities provided onboard for tailoring K.P.'s Boys 43 and shoe-making and forget the hard work, often under unpleasant conditions, and very long separations from their families in Hong Kong, which is the lot of our "firms." If it were not for them we would have to provide our own laundry team from the Ship's Company and would have no tailoring or shoe repair facilities onboard. H.M. Ships on the Far East Station are allowed to employ these firms.

They are controlled by the Commodore-in-Charge Hong Kong and their insurance, contracts, price lists and personal record are all carefully scrutinised. How do these firms start? Take the story of K. P. Lau or Lau Kan Pui to quote his proper name. He started as an apprentice tailor in H.M.S. Unicorn in 1949 and in 1953 spent a year ashore in Hong Kong doing business with ships in the dockyard. From there he joined H.M.S. Chichester as No. 1 Boy in charge of the Tailor's Shop and about a year later transferred to H.M.S. Belfast. He first became his own boss with a small tailoring firm in H.M.S. Gambia and finally transferred to H.M.S. Victorious in 1960. He now employs 44 men in the three firms in Victorious as well as running the firms in H.M.S. Forth and a business in Kowloon.

Gordon Smith's wonderful naval-history.net website is full of information including the text of Naval Life and Customs by Lt-Cdr John Irving, RN. It was published in 1944 by Sherratt & Hughes, Altrincham. According th that, the "G" mentioned in the routines above might mean a bugle's "single note - 'one 'G'' this is called. This is the signal for all divisional officers to report,"

The scan is of the cover of my own copy of the book. It's a very interesting read.