The HMS Gambia Association was formed in 1988. It's first chairman was Brian Hughes who served as cook on HMS Gambia's 1958/60 commission.

Brian Hughes - Cook, 1958/60 commission. Served as chairman from the Association's formation in 1988 to 2006. Bill Hartland reported that "Brian conducted the Meeting with great decorum, seeing as he kept on saying, "This is my last time in the Chair, and I am going to follow the procedure in full and properly too!""

William Casbolt - Electrical Mechanician, 1957/59. Brian Hughes chose not to be reelected because of health issues, at the Annual General Meeting in Chester on Saturday, September 16, 2006 and Bill was elected Chairman.

The 40th Commissioning Anniversary Reunion was held between September 23 - 25, 1983 at Hokitika, New Zealand and was largely organized by ex-crew members Jack Stuart and Colin Howat. 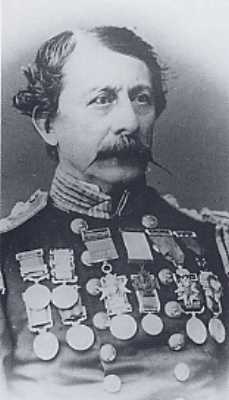 Captain George Fiott Day was one of the earliest English recipients of the Victoria Cross, the highest and most prestigious award for gallantry in the face of the enemy that can be awarded to British and Commonwealth forces. He was also a Chevalier of the Legion of Honour.

George Fiott Day was born in Southampton, the son of Charles Day of Spear Hall, a large country house just off Portswood Road. This was the same Charles Day who co-established the iron works in Millbrook and who financed his other son, Charles Arthur Day, and William Summers to set up their engineering works at Northam, initially known as Day, Summers and later as Summers Groves and Day.

George joined the Royal Navy as a First Class Volunteer in 1833. His first vessel sailed to the Pacific Ocean and was wrecked off the coast of Patagonia in 1835. After serving off the west coast of Africa, in 1838 he departed for six and a half years service in the Mediterranean Sea, taking part in the bombardment of St. John d'Acre on the Syrian coast in 1840. From 1845 to 1848, he served in Africa, before departing for the Cape of Good Hope and the coast of Brazil. During the hostilities between the Argentine Confederation and Buenos Aires, he patrolled the Rivers of Paraguay and the Río de la Plata. In 1854, he was sent to the Baltic Sea, and then back to the Mediterranean Fleet, and eventually to the Black Sea in 1855, where he won his Victoria Cross. He was 35 years old, and a lieutenant in the Royal Navy during the Crimean War:

On 17 September 1855 at Genitichi, Crimea, Lieutenant Day of HMS Recruit was put ashore from a rowing boat to reconnoitre the bridge, batteries and enemy gun boats on the Arabat Spit. He went alone and after covering four or five miles of swampy ground, sometimes up to his thighs in water, he got to within 200 yards of the enemy position, where he found that the gun boats appeared to be under-manned and lightly defended. He returned to his ship convinced that a surprise attack was possible, but had to abandon this plan when he returned on 19 September and found the enemy on the alert and the gun boats fully manned.

In 1857, he was again off the west coast of Africa, and in late 1858 he sailed for the China station. He was placed on the Captain's retired list in February, 1867, owing to ill health, with the rank of Captain.

In 1858, he married Mary Ruddell-Todd, the daughter of James Ruddell-Todd (1788–1852) M.P., and his wife Eliza Henrietta Campbell, daughter of daughter of Duncan Campbell (1771–1840), 5th of Inverneill House. His wife's maternal grandfather was a brother of Sir James Campbell of Inverneill and a nephew of General Sir Archibald Campbell. Mrs Day was a first cousin of Emily Georgina Carter-Campbell of Possil and Willoughby Harcourt Carter. The Days were the parents of three daughters. George Fiott Day moved to Weston-super-Mare with his wife and daughter in 1875, but died on the 18th December 1876 following a long illness, at his home, The Anchor Head Hotel, aged 56.

George Fiott Day was buried in Milton Road Cemetery, Weston-super-Mare. The burial was well attended but, perhaps oddly, there was no gravestone. Later, the burial plot was bought by a Reverend Foster who placed his daughter Caroline in the same grave and marked it by placing a small plaque over it bearing her name.

Victoria Cross research team, father and son, John and Alan Rider rediscovered the unmarked grave and, with the help of Weston Town Council, paid for a new Blue Plaque at the hotel and put a headstone on the grave site. The new headstone was unveiled on May 14, 2002 with members of the HMS Gambia Association acting as Honour Guard.

August 15, 2020 is the 75th anniversary of VJ Day, marking both the surrender of Japan and the end of the Second World War. Whilst VE Day marked the end of the war in Europe in May 1945, many thousands of Armed Forces personnel were still involved in bitter fighting in the Far East. Victory over Japan would come at a heavy price, and Victory over Japan Day (VJ Day) marks the day Japan surrendered on the 15 August 1945, which in effect ended the Second World War everywhere.

This Oyez Oyes was produced by a local branch of the Royal British Legion. 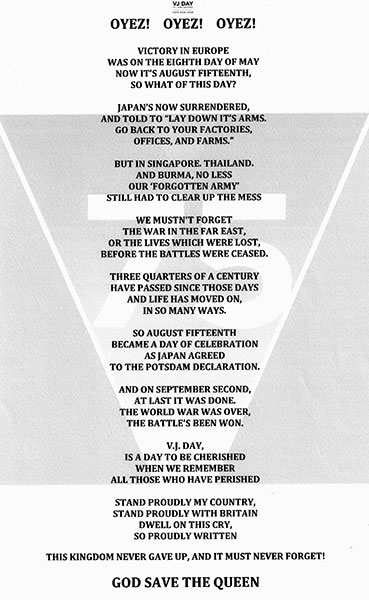 See this as a larger PDF