In February 2022, I got an email from Sandra Hammer the daughter of Gilbert Henry Wilson Preston who served on HMS Gambia from January 5, 1945 to November 4, 1945 as radarman. 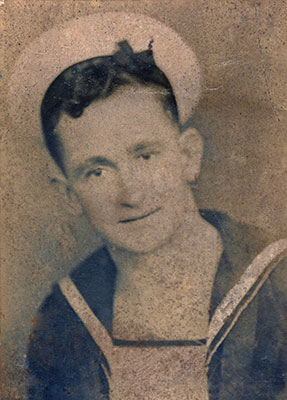 Sandra very kindly wrote a biography of her father and I am very happy to present it and the photos Sandra sent here.

My father Gilbert Henry Wilson Preston was born on 11th August 1919 at Kerikeri, New Zealand. He was the only son with six sisters. To his family and friends he was known by the shortened version of his name of ‘Gil’.

He never spoke much about his service during WW2. As a kid I remember there were a few felt pennant flags hanging on the wall in our lounge room. One of them was the Final Victory Tokyo September 2nd 1945 H.M.N.Z.S Gambia. Unfortunately I don’t think these survived the years. There are many things I would love the opportunity to talk to my father about, now that I am an adult, but unfortunately when I was a child I never thought to ask and probably never had enough interest at that time. This is something that develops as you age and become an adult. My father always had a curious mind and this is something I think I inherited from him.

Like him I have a passion for knowledge. He was always keen to learn about new things and I remember him buying a very expensive set of Encyclopedia Britannica in a lovely bookcase. The set sat proudly in our lounge room when we were kids and I used to use them a lot for my school projects. I would often catch my dad looking through one of the volumes absorbing all the knowledge. My dad was the kind of person who always wanted to see around the next corner. To this day I am the same, always wanting to see over the next rise. If we ever asked where are we going, he would always reply ‘There and back to see how far it it’. This is a motto I live by still today.

I clearly remember being fascinated by two lovely Japanese dolls in glass display cases that were basically stored in a cupboard in the kitchen above the fridge, out of the way and seemingly uncared for. Although I never asked where they came from I always assumed Dad had picked them up while he was in Japan during WW2. Often when I was alone in the house I would grab the step-stool and climb up to the cupboard to admire them. Oh, how I wish they had survived the years.

My father died on 13th August 1981, aged just 62. He is buried in Waikumete Cemetery in Auckland, New Zealand.

On return to New Zealand my father married his sweetheart Merle Maureen Nancy Shaw on 10th November 1945. He wore his Navy uniform for the wedding. Unfortunately this marriage didn’t work out and they divorced on 12th July 1954. My father married a second time to my mother Shirley Doreen Smith on 18th June 1955. They were happily married until his death on 13th August 1981.

I love the photo of my father in his navy uniform with five of his six sisters. He was the second youngest and they all look so proud of him. 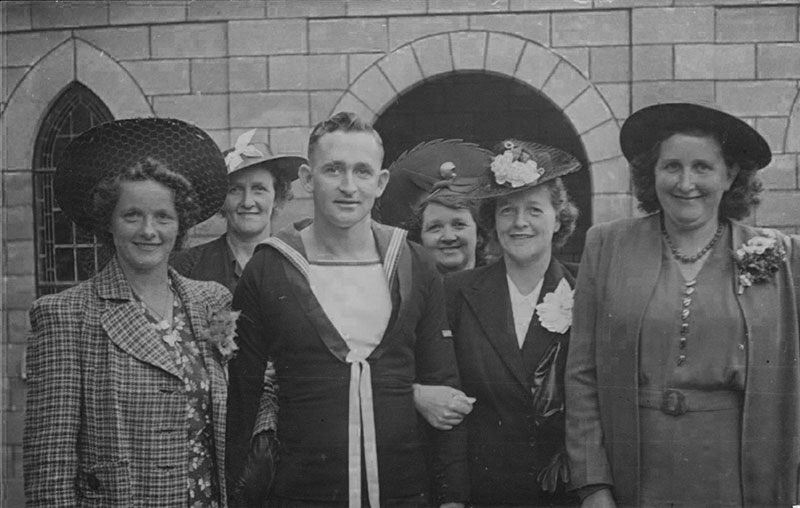 From the documents, Gilbert started his training at HMNZS Philomel at Auckland, New Zealand on July 9, 1942. His service ended on December 4, 1945. For his service he was awarded the 1939-1945 Star, Pacific Service Star, 1939-1945 War Medal and the New Zealand War Service Medal.

Dad built several large shed on the property at Huia Road which he filled with items he collected from rubbish (Many collectables items) One shed was filled with old cars, a Dodge, 1955 Jags etc Dad enjoyed collecting cars which he always intended to restore. Of these he did restore the Dodge and very lovingly a 1955 MK 7 Jag. The 1955 MK7 Jag was his pride and joy and he would enjoy driving it on special occassions such as our family christmas holidays.

Every christmas for as long as I can remember Dad would hook up the Caravan and we would be off to who knew where. We visited most everywhere in the North Island and learnt much about the country in which we live.

He owned his own business for most of his life. Starting as Supreme Auto Wreckers in Avondale and then as Supreme Car Finance in the same location at 3055 Gt North Road.

I really must thank Gilbert's daughters, Sandra Hammer and Julie Preston, for finding and sharing all this information about their father, his service and his life.