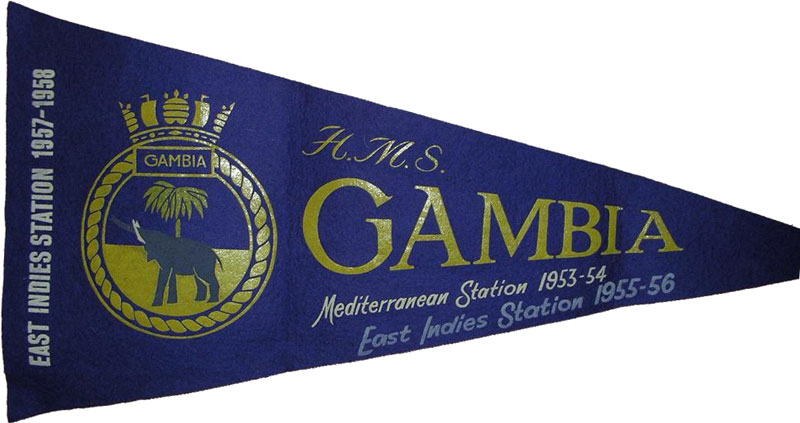 The Commissioning Ceremony at Rosyth in 1957

In July 2017, Terry Craig who was an electrical mechanician on HMS Gambia's 1957/58 commission very kindly sent these newspaper cuttings about the commissioning of the ship: 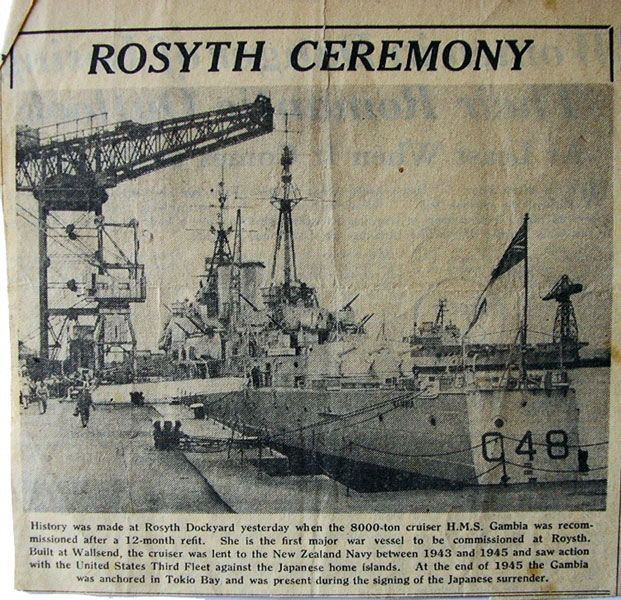 History was made at Rosyth Dockyard yesterday when the 8,000-ton cruiser HMS Gambia was recommissioned after a 12-month refit. She is the first major war vessel to be commissioned at Rosyth. Built at Wallsend, the cruiser was lent to the New Zealand Navy between 1953 and 1945 and saw action with the United States Third Fleet against the Japanese home islands. At the end of 1945 the Gambia was anchored in Tokio Bay and was present during the signing of the Japanese surrender. 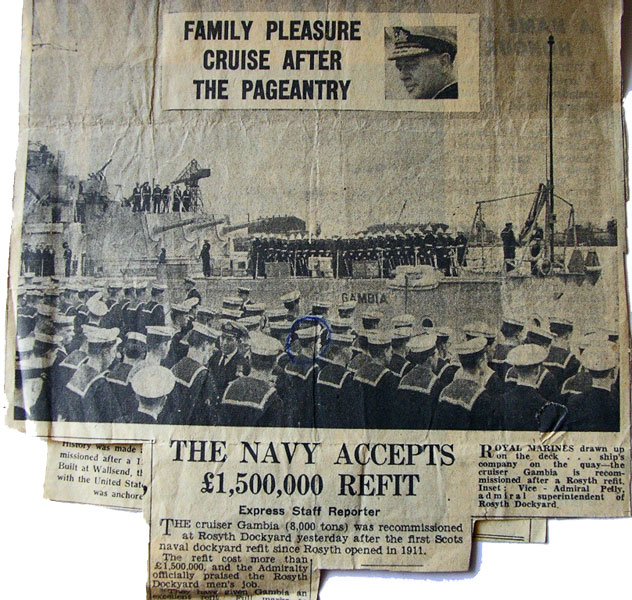 The cruiser Gambia (8,000 tons) was recommissioned at Rosyth dockyard yesterday after the first Scots naval dockyard refit since Rosyth opened in 1911.

The refit cost more than £1,500,00 and the Admiralty officially praised the Rosyth Dockyard men's job.

Image caption: Royal Marines drawn up on the deck ... ship's company on the quay - the cruiser Gambia is recommissioned after a Rosyth refit.

Terry Craig is the sailor circled in ink at the center of the picture.

Terry also very kindly sent these photos of the commission:

Terry also remembers a little bit of trivia, "When we were stocking up with beer for our commission to the East Indies Station in 1957, a lot of it was stowed in between the bulkheads down below some storerooms. Inside the bulkhead was a painted flag of New Zealand. Must have been done when they stocked up with beer?"

In April 2019, I was sent a photo from Brian Saunders of the HMS Superb Association website. It shows an impromptu concert by crew members of HMS Gambia, Ocean and Superb on HMS Albion on May 28, 1957. Albion and Ocean were Colossus-class light fleet aircraft carriers, and Superb a Minotaur-class light cruiser.

The photo shows the "Gambits" from H.M.S. Gambia, "The Skowballs" from H.M.S. Superb, and the "Oceanaires" from H.M.S. Ocean. Three skiffle groups, seen rehearsing aboard H.M.S. Albion for the concert party to be given for the Queen. According to Alamy who are selling copies of the photo, it was taken by Keystone Press, USA during rehearsals on May 5, 1957. 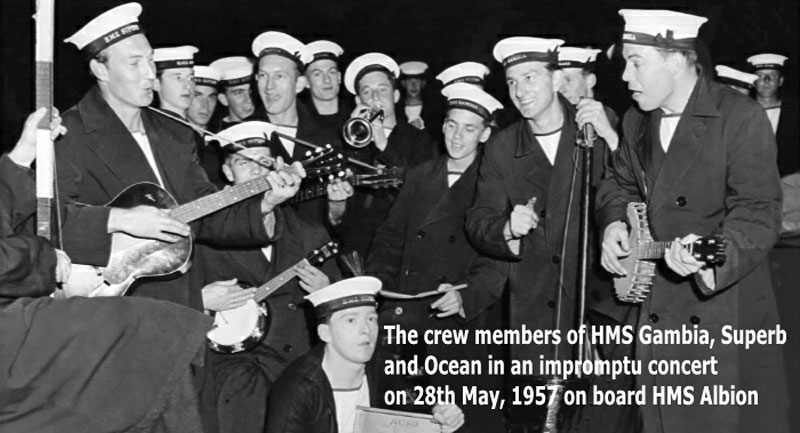 In May 1957, Gambia was the last flagship on the Persian Gulf station. She was ordered home at the beginning of the month arriving in Invergordon on May 21. A Royal Review took place May 27 – 29. After this, Gambia spent the summer flying the flag around Scandinavia. She returned to Rosyth on September 19, 1958.

Part of the Home Fleet Royal Review, May 1957

Sometime in May 1957, probably between May 21 and May 28, the ship played host to a party of students from Strathallan School near Perth, Scotland. The June 1957 edition of the school magazine The Strathallian records the visit:

A Visit to H.M.S. Gambia

One Thursday in May some of the Royal Naval section paid a visit to H.M.S. Gambia, a cruiser of the Fiji class. The ship was undergoing sea-trials on the Firth of Forth.

In order to reach Rosyth docks at seven o’clock the party had to rise at five in the morning. A light breakfast was taken at school, and this served to keep the party awake during their car journey to the docks. Once through the barrier at the entrance to the docks, the party was hurried on board H.M.S. Gambia, and fallen in on deck. They were then split up into two parts, and placed where they could see the activities taking place while the ship was leaving harbour. However, owing to the bitterly cold wind which was blowing, the party soon re-united around the funnel, which served effectively as a heater.

When the ship had left harbour, the party were taken below to the Royal Marines mess, where a first-class breakfast of cold herring and three boiled eggs per person was served. When the dishes had been washed and the mess tidied, the party went above again, to the ship’s cinema. There they were given a lecture on damage control, this being the procedure to be followed by the crew in the event of any damage being done to the ship. After this they were led below by a Midsnipman, and taken to the ship’s wheel. When permission from the bridge had been granted, two or three cadets had a spell at the wheel, and then they were taken to the Communications centre, where some complicated computors and radar apparatus were shown to them.

The next item was a practical lesson on manoeuvering and tiring 40 m.m. A.A. guns. There was, of course, no ammunition, but as the main attraction was the joy-stick control which turned and elevated the gun, this did not really matter. Before everybody had been on it, however, they had to go below for lunch, which included almost unlimited chicken, figs and custard. The party then returned to the ship’s cinema, where they were given a talk on the part which the Navy had played during the Suez crisis. The lesson on the gun was then completed, and they were given a demonstration of the six inch gun by the ship’s crew. There followed another spell on the wheel, and a visit to the boiler room.

At tea some cadets found a shop, where they procured refreshments. The party was then divided into two again, one half going to the ship’s wheel, while the other watched a boat being hoisted overboard. By this time they were approaching the Forth Bridge, and once the ship had been moored to a buoy, they went ashore, and started the journey back.

Judging by the animated conversation at table back at school, the party had spent a most informative and enjoyable day.

In her 2018 PhD thesis, Stages of the Sea: 20th Century Theatrical Entertainment in the Royal Navy for Warwick University, Sarah Penny wrote of the various parties and visits held on Royal Navy ships, including HMS Gambia.

This extract comes from Distant Drums: The Role of Colonies in British Imperial Warfare by Ashley Jackson.

HMS Gambia served as East Indies Station flagship in 1955-56 and again in 1957-58. Band Corporal Michael Hutton served aboard the cruiser during her 1957-58 commission. She sailed from Chatham on 17 October 1957 to relieve HMS Ceylon, then the East Indies Station flagship. The two ships met at Bahrein, where, on 6 November 1957, Gambia received the flag of the Commander-in-Chief East Indies Station. Gambia spent a month visiting places such as Um Qassar, Abadan, and Basra, 'where the ship's concert party gave its first performance, then back to Aden for Christmas.'

On board were twenty-five Somalian ratings under Chief Tindal, Noor Sulliman, a man with thirty-two years of Royal Navy experience behind him. They had been collected from British Somaliland on the way, and remained working on board the ship throughout its commission. Whilst in the Gulf Gambia took part in Exercise Crescent, a NATO and Baghdad Pact exercise involving the cruiser and two frigates from Britain, along with vessels from America, Iran, Pakistan, and Turkey.

After Christmas the ship sailed for Ceylon via Berbera in British Somaliland, where the band Beat Retreat on the beach. At Trincomalee half the ship's company went on leave, after which the Indian Cruise began, bringing visits to Madras, Vizagapatan, and Calcutta. Returning to Ceylon for minor repairs in dry dock, the crew went to the rest camp at Diyatalawa. Most of the band members were billeted with tea planters families, though Hutton spent a dry week with the Reverend Tom Arnold, who 'played a mean piano' but was 'a bit short on the hard stuff.'

After Ceylon, Gambia visited the west coast of India and called at Malé in the Maldives, where the band performed numerous concert parties and Beat Retreat. It was then on to Bombay, and, the Indian Cruise at an end, to Aden, 'where we stayed for some time due to local trouble'. A second Persian Gulf Cruise was cancelled, so the ship returned to Ceylon for the annual JET exercises, stopping off for a week in Karachi en route. 'Here there were many engagements to cope with, cocktail parties, dinners ashore at the High Commissioner's residence, and return visits on the Gambia.' The last week of the JET exercises were spent ashore by the band, who had acted as lookouts whilst the ship was at defence stations during the exercise.

Now the task was to train with the Indian and Ceylon Navy Bands for the combined Massed Bands Retreat that would herald the end of the JET exercises. HMS Gambia then embarked on 'the best and busiest part of the year, the East African Cruise, lots of hard work ahead but plenty of pleasure too.' Mauritius, the Seychelles, Dar-es-Salaam, Zanzibar, and Mombasa were visited before the ship returned to Aden and then sailed home to Chatham. 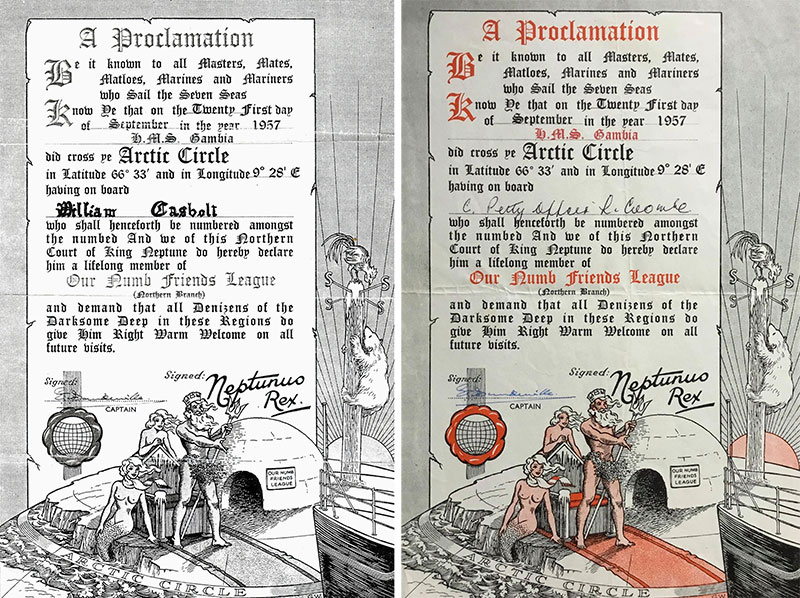 Be it known to all Masters, Mates, Matlots, Marines and Mariners who Sail the Seven Seas

and demand that all Denizens of the Darksome Deep in these Regions do give him Right Warm Welcome on all future visits.

Eric W. Bearman served in Supply during the 1957/58 commission. I am not sure how Bill Hartland came by these photos.

Ernest "Bill" Hartland was a Royal Marine Bandsman on the 1957/58 commission. Bill was the author of the original HMS Gambia website this one is based on. He very kindly sent these photos:

Michael Hutton was also a Royal Marine Bandsman Corporal, on HMS Gambia's 1957/58 commission and he provided the following photos:

Bob Jackson was a Royal Marine on the 1957/58 commission. In August 2017, he very kindly sent these photos:

As Royal Marine Bandsmen, both Bill Hartland and Michael Hutton contributed photos and stories of their time as Marines on The Band of Her Majesty's Royal Marines website 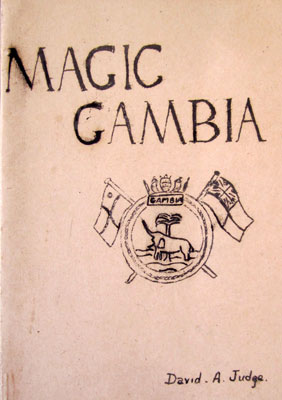 David Arthur Judge MBE served out his two-years' National Service on HMS Gambia's 1957/58 commission. In August through to October 2019, David's daughter, Christine, very kindly sent me a copy of a memoir that he wrote while serving and all the above photos.